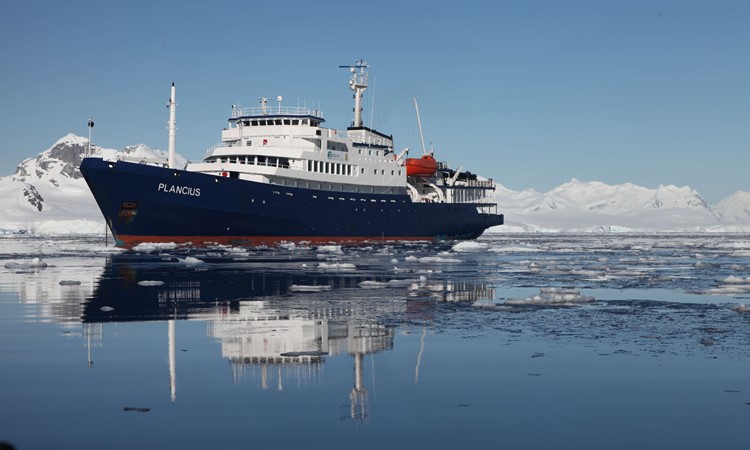 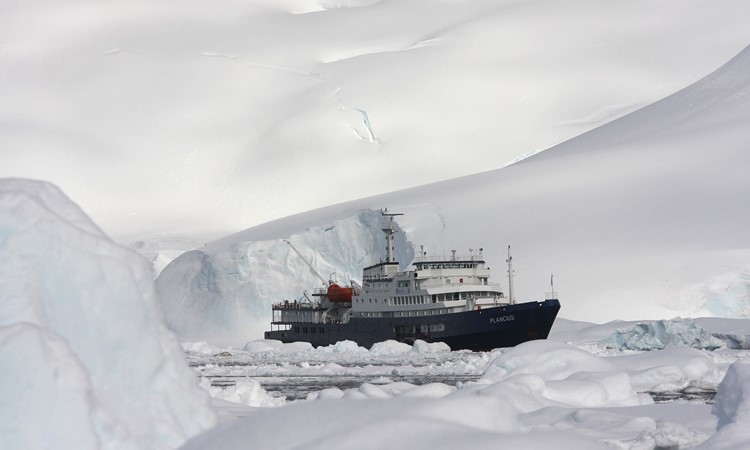 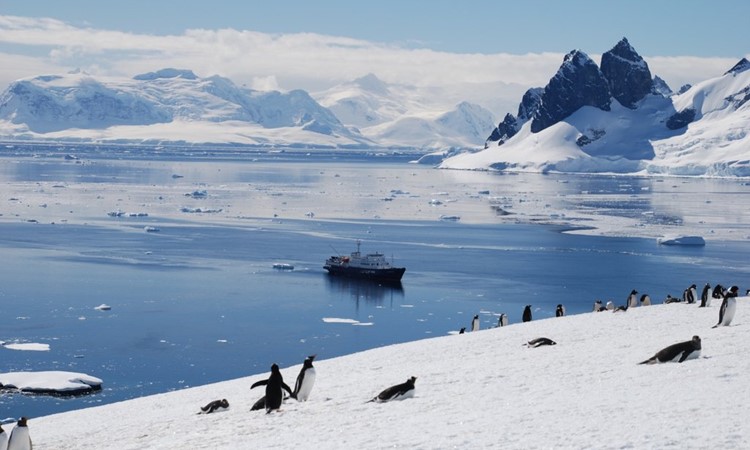 Looking for a different cruise? View our complete list of expedition ships here. You can also find our most popular cruise packages here.

M/V Plancius was built in 1976 as an oceanographic research vessel for the Royal Dutch Navy and was named Hr. Ms. Tydeman.

The ship sailed for the Dutch Navy until June 2004 and was eventually purchased by Oceanwide Expeditions.

The vessel was completely rebuilt as a 116-passenger vessel in 2009 and complies with the latest SOLAS-regulations (Safety Of Life At Sea). M/V Plancius is classed by Lloyd’s Register and flies the Dutch flag. All cabins offer lower berths (one queen-size bed in the superior cabins and two single beds in the twin cabins), except for the 4 quadruple cabins (for 4 persons in 2x upper and lower beds), and 2 triple cabins (1 bunk bed plus 1 lower bed).

The vessel offers a restaurant/lecture room on deck 3 and a spacious observation lounge (with bar) on deck 5 with large windows, offering full panorama view. M/V Plancius has large open deck spaces (with full walk-around possibilities on deck 4), giving excellent opportunities to enjoy the scenery and wildlife.

She is furthermore equipped with 10 Mark V zodiacs, including 40 HP 4-stroke outboard engines and 2 gangways on the starboard side, guaranteeing a swift zodiac operation. M/V Plancius is comfortable and nicely decorated, but is not a luxury vessel. Our voyages in the Arctic and Antarctic regions are primarily defined by an exploratory educational travel programme, spending as much time ashore as possible.

Plancius fully meets our demands to achieve this. The vessel is equipped with a diesel-electric propulsion system which reduces the noise and vibration of the vessel considerably. The 3 diesel engines generate 1.230 horse-power each, giving the vessel a speed of 10 - 12 knots. The vessel is ice-strengthened and was specially built for oceanographic voyages. M/V Plancius is manned by an international crew of 37 (18 nautical crew and 19 hotel crew), 8 expedition staff (1 expedition leader, 1 assistant expedition leader and 6 guides/lecturers), and 1 doctor.

Full Spitsbergen Circumnavigation with a visit to Kvitøya

This cruise around Spitsbergen gives you a great chance to see whales, foxes, reindeer, seals, and polar bears. The expedition will make a landing on the island of Kvitøya, a site of historical significance, and home of a large walrus population.

Day 1: Largest town, biggest island
You touch down in Longyearbyen, the administrative center of Spitsbergen, the largest island of the Svalbard archipelago. Enjoy strolling around this former mining town, whose parish church and Svalbard Museum make for fascinating attractions. Though the countryside appears stark, more than a hundred species of plant have been recorded in it. In the early evening the ship sails out of Isfjorden, where you might spot the first minke whale of your voyage.

Day 2: Cruising Krossfjorden
Heading north along the west coast, you arrive by morning in Krossfjorden. Here you might board the Zodiacs for a cruise near the towering blue-white face of the Fourteenth of July Glacier. On the green slopes near the glacier, colorful flowers bloom while flocks of kittiwakes and Brünnich’s guillemots nest on the cliffs. You have a good chance of spotting an Arctic fox scouting for fallen chicks, or a bearded seal paddling through the fjord.

In the afternoon you sail to Ny Ålesund, the northernmost settlement on Earth. Once a mining village served by the world’s most northerly railway – you can still see its tracks – Ny Ålesund is now a research center. Close to the community is a breeding ground for barnacle geese, pink-footed geese, and Arctic terns. And if you’re interested in the history of Arctic exploration, visit the anchoring mast used by polar explorers Amundsen and Nobile in their airships, Norge (1926) and Italia (1928).

Day 3: Stop at the Seven Islands
The northernmost point of your voyage may be north of Nordaustlandet, in the Seven Islands. Here you reach 80° north, just 870 km (540 miles) from the geographic North Pole. Polar bears and walrus inhabit this stark desolate landscape. Later in the day the ship may roam for several hours among the pack ice in search of wildlife.

Day 4: The great glacier front of Schweigaardbreen
Pushing east to Nordaustlandet, you reach the area where the Italian captain Sora tried to rescue the Nobile Expedition in 1928. The focus here is the great glacier front of Schweigaardbreen, though you may also land at Firkantbukta, getting the chance to gain some altitude and take a few higher-elevation photos. Alternately, you could make a Zodiac cruise near Storøya, where you might encounter walruses.

Day 5: Ice cap at Kvitøya
Today you try to reach the rarely visited Kvitøya, far to the east and close to Russian territory. The enormous ice cap covering this island leaves only a small area bare. You land at the western tip of Andréeneset, where the Swedish explorer S. A. Andrée and his companions perished in 1897. Another objective for the day is Kræmerpynten, where a sizable group of walruses reside.

Day 6: The longest glacier in Spitsbergen
South of Nordaustlandet you may land on Isisøya, formerly a Nunatak area surrounded by glaciers but now an island surrounded by the sea. You then may pass by Bråswellbreen, part of the largest ice cap in Europe and famed for its meltwater waterfalls.

Day 7: Barentsøya’s many bounties
The plan is to make landings in Freemansundet, though polar bears sometimes make this impossible. Potential stops on Barentsøya include Sundneset (for an old trapper’s hut), Kapp Waldburg (for its kittiwake colony), and Rindedalen (for a walk across the tundra). You might also cruise south to Diskobukta, though Kapp Lee is more likely your destination. On Kapp Lee is a walrus haul-out, Pomor ruins, and the chance for hikes along Edgeøya.

Day 8: Land of the pointed mountains
You start the day by cruising the side fjords of the Hornsund area of southern Spitsbergen, taking in the spire-like peaks: Hornsundtind rises 1,431 meters (4,695 feet), and Bautaen is a perfect illustration of why early Dutch explorers named this island Spitsbergen, meaning “pointed mountains.” There are 14 sizable glaciers in this area as well as opportunities for spotting seals, beluga whales, and polar bears.

Day 9: Bell Sund’s flora, fauna, and haunting history
Today you find yourself in Bell Sund, one of the largest fjord systems in Svalbard. The ocean currents make this area slightly warmer than other areas in the archipelago, which shows in the relatively lush vegetation. Here there are excellent opportunities to enjoy both history and wildlife. A possibility is Ahlstrandhalvøya, at the mouth of Van Keulenfjorden, where piles of beluga skeletons can be found.

These remains of 19th-century whale slaughter are a haunting reminder of the consequences of rampant exploitation. Fortunately, belugas were not hunted into extinction, and you have a good chance of coming across a pod. Alternately, while cruising the side fjords of Bellsund, you can explore tundra where reindeer like to feed as well as rock slopes where little auks are breeding.

Day 10: There and back again
Every adventure, no matter how grand, must eventually come to an end. You disembark in Longyearbyen, taking home memories that will accompany you wherever your next adventure lies.

Tour one of Antarctica's most scenic seas

The Weddell Sea Discoverer cruise sails through the iceberg-blessed Antarctic Sound on their way to the eastern side of the Antarctic Peninsula. You’ll get to spot out a variety of seals, the fantastically beautiful landscapes, and the noisy rookeries of thousands of nesting penguins.

Day 1: End of the World, Start of a Journey
Your voyage begins where the world drops off: Ushuaia, Argentina, reputed to be the southernmost city on the planet, located on the far southern tip of South America. Starting in the afternoon, you embark from this small resort town on Tierra del Fuego – nicknamed “The End of the World” – and sail the scenic, mountain-fringed Beagle Channel for the rest of the evening.

Day 2 & 3: Path of the Polar Explorers
Over the next two days on the Drake Passage, you catch a taste of life from the perspective of the polar explorers who first braved these regions: cool salt breezes, rolling seas, maybe even a fin whale blasting up sea spray.

After passing the Antarctic Convergence – Antarctica’s natural boundary, formed when north-flowing cold waters collide with warmer subantarctic seas – you are in the circum-Antarctic upwelling zone.

Not only does the marine life change, the avian life changes too: A variety of albatrosses and petrels show up, along with Cape pigeons and southern fulmars . Then, near the South Shetlands Islands, the first icebergs flash into sight.

Day 4 – 8: Enter the Antarctic
You sail directly into the Weddell Sea through the often ice-clogged Antarctic Sound. Huge tabular icebergs herald your arrival to the eastern side of the Antarctic Peninsula. The Weddell Sea is largely covered in sea ice during the year, but the northwestern corner offers great opportunities for exploration in places only the lucky few get to visit.

The sites for your activities may include: Paulet Island – A huge number of Adélie penguins take residence here. Brown Bluff – Maybe the most scenic location in the entire northern tip of the Antarctic Continent: sheer canyon walls, fallen boulders, beautiful volcanic creations capped with ice.

A large Adélie penguin rookery lives here, with gentoo penguins and nesting snow petrels also to be found. Dundee Island – A mostly uninhabited Argentine station , Base Petrel, can be seen here, as well as Antarctic fur seals (and southern elephant seals) along the coastline.

Farther into the Weddell Sea, the options vary with the ice conditions: James Clark Ross Island – You can explore a number of rarely visited places here. The imagination is further stirred by suggestive names like Brandy Bay and Whiskey Bay. Devil Island – A large Adélie penguin rookery as well as stunning views of Erebus and Terror Gulf are seen here. Snow Hill Island – This location, known for its sedimentary rock, tells tales of the incredible Antarctic explorations of the early 20th century.

Day 9: Scenes of South Shetland
The volcanic islands of the South Shetlands are windswept and often cloaked in mist, but they do offer subtle pleasures: There’s a wide variety of flora (mosses, lichens, flowering grasses) and no small amount of fauna (gentoo penguins, chinstrap penguins, southern giant petrels).

In Deception Island, the ship plunges through Neptune’s Bellows and into the flooded caldera. Here you find hot springs, an abandoned whaling station, and thousands of cape petrels – along with a number of kelp gulls, brown and south polar skuas, and Antarctic terns.

Wilson’s storm petrels and black-bellied storm petrels also nest in the ruins of the whaling station in Whalers Bay. As an alternative, you may be able to engage in activities near Half Moon Island.

Here chinstrap penguins and Weddell seals often haul out onto the beach near Cámara Base, an Argentine scientific research station. Conditions on the Drake Passage determine the exact time of departure.

Day 10 - 11: Familiar Seas, Familiar Friends
Your return voyage is far from lonely. While crossing the Drake, you’re again greeted by the vast array of seabirds remembered from the passage south. But they seem a little more familiar to you now, and you to them.

Day 12: There and Back Again
Every adventure, no matter how grand, must eventually come to an end. It’s now time to disembark in Ushuaia, but with memories that will accompany you wherever your next adventure lies.

All itineraries are for guidance only. Programs may vary depending on ice, weather, and wildlife conditions. The onboard expedition leader determines the final itinerary. Flexibility is paramount for expedition cruises. The average cruising speed for m/v Hondius is 10.5 knots. 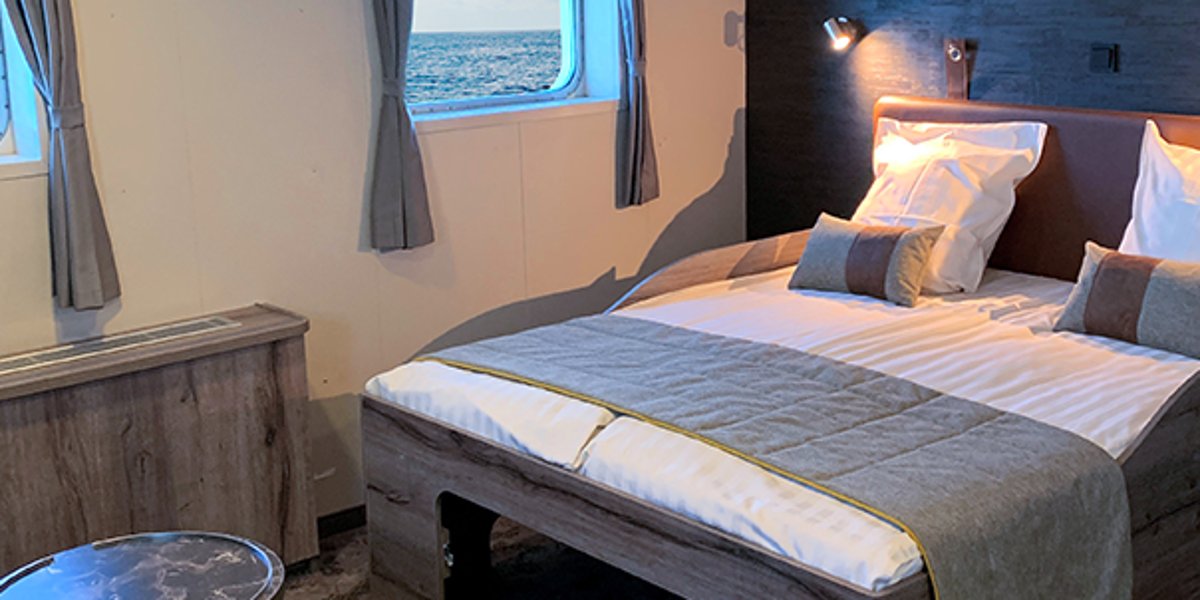 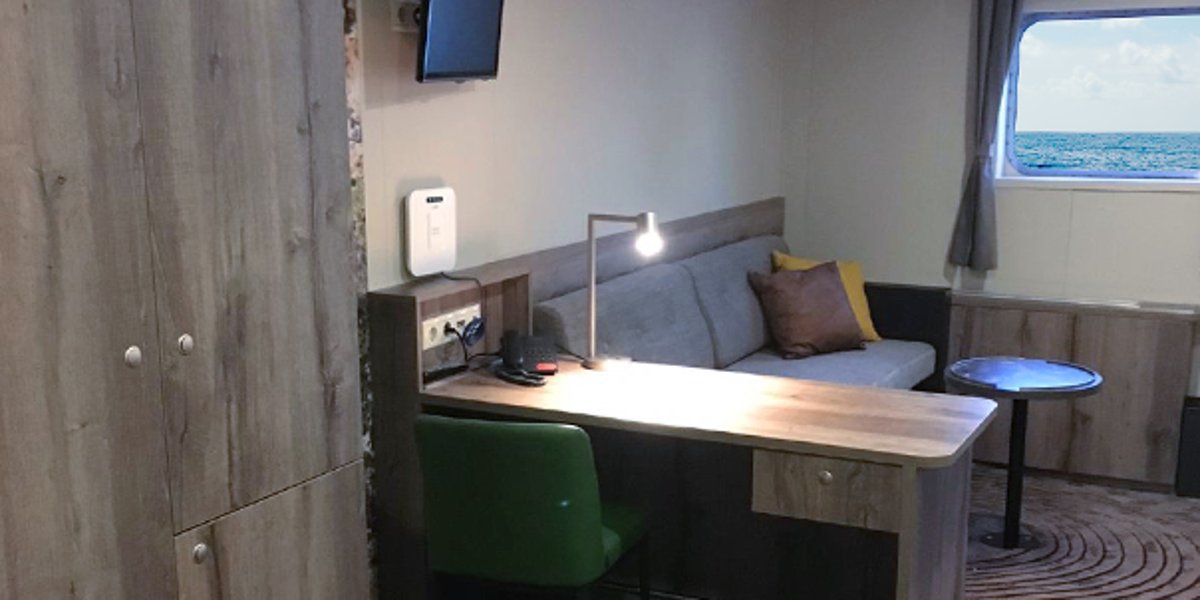 Some hotels will let you use their facilities (gym, spa, pool, beach, etc.) for a reduced day pass. This can be great for layovers!