Weddell Sea Antarctica - In Search of the Emperor Penguin with Helicopters

A true expedition, our Weddell Sea cruise sets out to explore the range of the Emperor Penguins near Snow Hill Island.

We will visit the area via helicopter and see a variety of other birds and penguins including Adélies and Gentoos.

Ortelius was built in Gdynia, Poland in 1989, was named Marina Svetaeva, and served as a special purpose vessel for the Russian Academy of Science. The vessel is re-flagged and renamed Ortelius. Ortelius is classed by Lloyd’s Register in London and flies the Cyprus flag. As Plancius, Ortelius was a Dutch / Flemish cartographer. Abraham Ortelius (1527 – 1598) published the first modern world atlas, the Theatrum Orbis Terrarum or Theatre of the World in 1570. 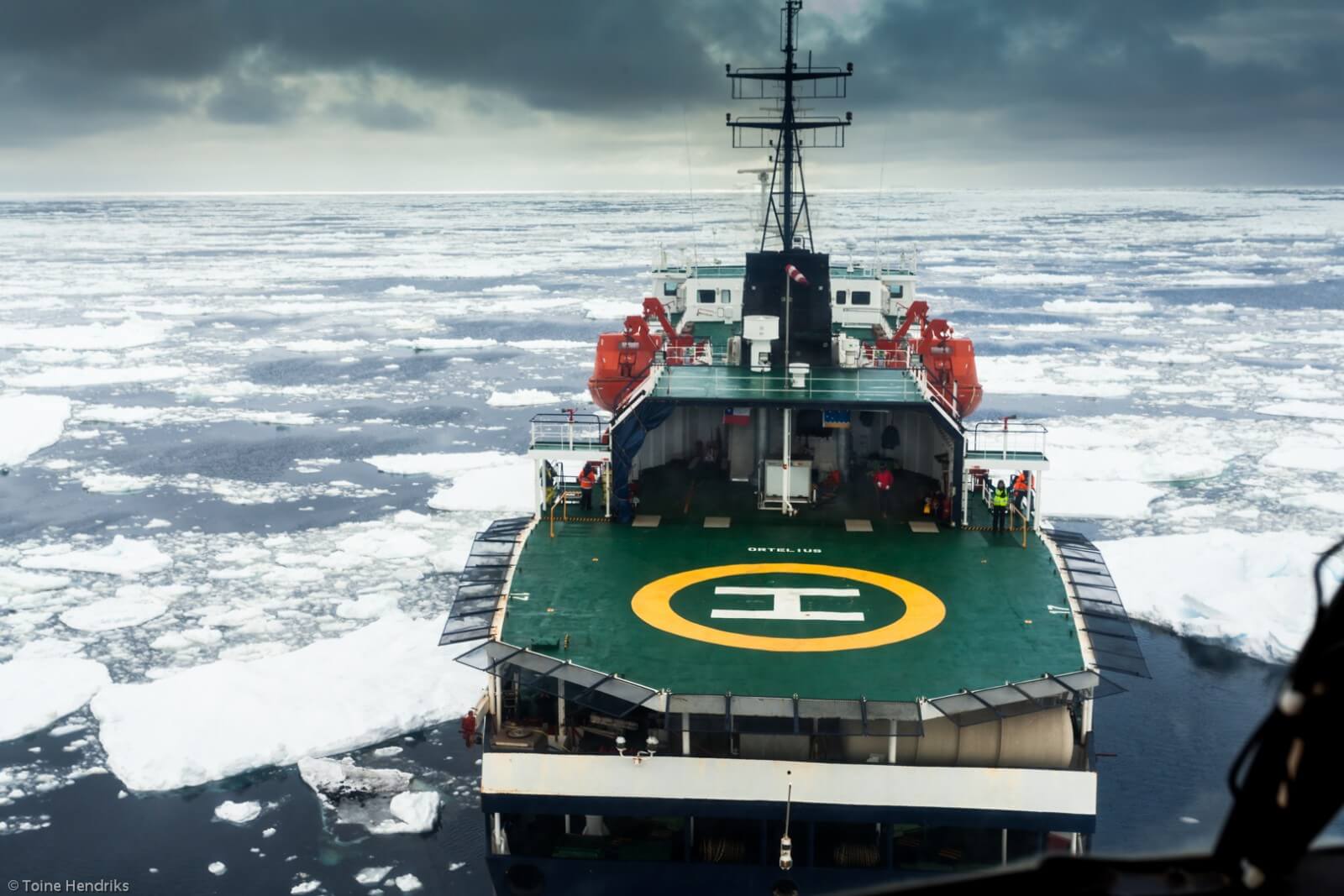 At that time, the atlas was the most expensive book ever printed.  The vessel has the highest ice-class notation (UL1 equivalent to 1A) and is therefore very suitable to navigate in solid one-year sea ice and loose multi-year pack ice. Ortelius is a great expedition vessel for 116 passengers with lots of open-deck spaces.

Our voyages are primarily developed to offer our passengers a quality exploratory wildlife program, trying to spend as much time ashore as possible. As the number of passengers is limited to approximately 116 on the Ortelius, flexibility assures maximum wildlife opportunities. Ortelius carries 10 zodiacs. The zodiac engines are 60hp Yamaha.

In the afternoon, embark in Ushuaia, Tierra del Fuego, Argentina, the southernmost city in the world located at the Beagle Channel and sail through this scenic waterway for the rest of the evening.

During today and tomorrow we sail across the Drake Passage.

When we cross the Antarctic Convergence, we arrive in the circum-Antarctic up welling zone. In this area we may meet Wandering Albatrosses, Grey Headed Albatrosses, Black-browed Albatrosses, Light-mantled Sooty Albatrosses, Cape Pigeons, Southern Fulmars, Wilson’s Storm Petrels, Blue Petrels and Antarctic Petrels. Near the South Shetland Islands, we glimpse at the first icebergs.

If the conditions do not allow us to manoeuvre through the English Strait then we continue sailing South of Livingston. These volcanic islands or the South Shetlands are windswept and often shrouded in mist and fog, but do offer subtle pleasures.

There is a nice variety of flora (mosses, lichens and flowering grasses) and fauna, such as Gentoo Penguins, Chinstrap Penguins and southern Giant Petrels.

A typical itinerary in the Weddell Sea could be as follows. This is a sample only, the final itinerary will be determined by the Expedition Leader on board.

We will sail into the Weddell Sea and if the Antarctic Sound is accessible and the ice does not prevent us to sail further, we might see the huge tabular icebergs that announce our arrival to the eastern side of the Antarctic Peninsula. During these days we use the ship and the helicopters in our attempts to find individual Emperor Penguins.

During our previous voyages we have had a high success rate in locating emperors. We will also offer scenic flights and – if the conditions allow us – possible helicopter landings on tabular ice-bergs and locations otherwise inaccessible so early in the season. Possible landing sites is for example Brown Bluff, probably the most scenic spot in the entire northern tip of the Antarctic Continent.

With steep canyon walls and tumbled boulders, an ice-cap looming above, beautiful volcanic creations and the scene is complete with thousands of Adélie penguins nesting on the slopes. A few Gentoo’s is mixed in for fun. Helicopter flights are a great contribution to the voyage, for example on the west side of the Antarctic Sound, an area usually only rarely seen from the air. The scenery is stunning with landscapes of layered sandstones, lava flows, glaciers tumbling into the sea and ice-bergs and pack-ice as far as the eye can see.

We can observe individual Emperor Penguins and Adélie Penguins on the ice floes; Cape-, Snow, and Giant Petrels fly high in the sky while Kelp Gulls, skuas and Wilson’s Storm Petrels scavenge down below us. The landscape is dominated by Jagged mountains pierced through the ice-caps and walls of ice dropped onto the slopes below. A beautiful helicopter flight over huge icebergs and fast ice can also be made close to View Point in Duse Bay.

We land on a rocky hillock close to an old refuge hut overlooking the bay. There will be still a lot of snow and ice but much of the intended walk on the Antarctic continent will be over a beautiful frost-shattered rock, almost entirely covered with the most fascinating lichen of all shapes and colors.

If the ice-situation allows us to go further into the Weddell Sea area, we will visit Devil Island and Vega Island with a large colony of Adélie Penguins and a magnificent view for those hikers who can make it to the top of the hill. Melting ice sometimes provides spectacular waterfall from the cliffs close to point ‘Well-Met’. Further south, we may also visit Seymour Island, where many fossils can be found.

On our way north through the Antarctic Sound we might pay a visit to the Argentinean station Esperanza on the Antarctic Continent. We will still look out for Emperor Penguins on the ice-floes. In the afternoon we may visit Gourdin Island, with three penguin species; Chinstrap, Gentoo and Adélie.

DAYS 5, 6: Alternate program if the route to snow hill island is free of multi-year pack-ice (less than 50% chance):

The use of helicopters has a great advantage and can support us in our goal to reach the Emperor Penguin colony, but the itinerary is ruled by the forces of nature, ice and weather conditions.

If the conditions are favourable, we intend to spend the first two days in the Emperor Penguin rookery. The helicopter operation will take a full day and the flight duration takes approximately 15 minutes.

The helicopter can accommodate 6 passengers per helicopter flight. The landing point of the helicopters will be carefully chosen and we will make sure that the Emperors Penguins are not disturbed or stressed by helicopter noise. Therefore, after arrival, the passengers continue their expedition on foot.

After a walk of approx. 45 minutes, passengers will experience an amazing rendezvous with the magnificent Emperor Penguins. Keep in mind that we are in the world’s most remote area and there are no guarantees, including a specific amount of helicopter time.

Conditions may change rapidly, having its impact on the helicopter operation and passengers should understand and accept this. Safety is our greatest concern and no compromises can be made.

In the morning we will sail to Deception Island where we have the last landing of our voyage at Pendulum Cove or Whalers Bay. From there we will depart around noon when conditions on the Drake Passage (weather and sea-conditions) are predicted as unfavorable.

Return voyage across the Drake Passage where we again have a chance of seeing many seabirds. 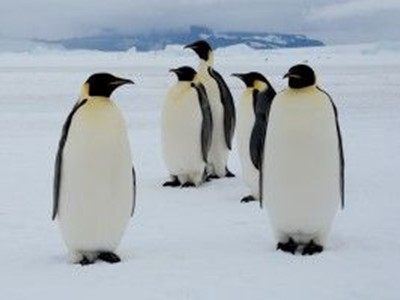 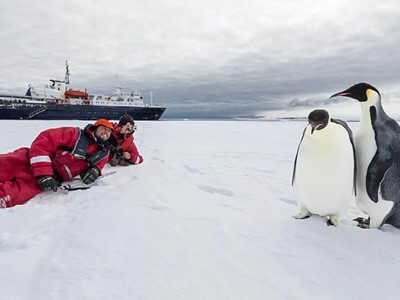 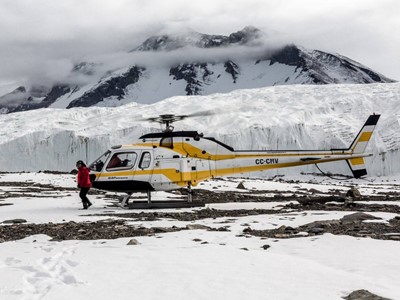 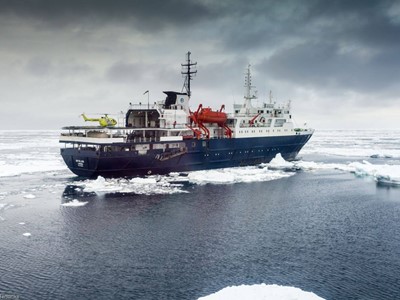 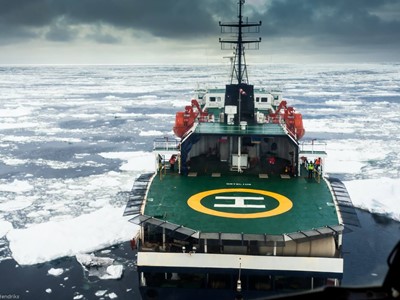 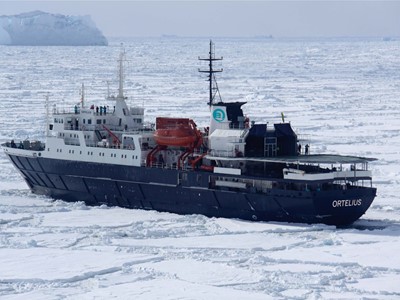 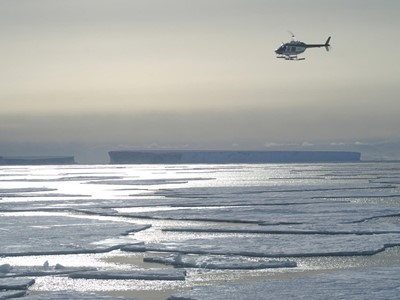 "The trip was very well (and quickly) organised."

The travel company responded to my questions very efficiently and with good in-depth knowledge of the country that I wanted to visit. When I am planning my next trip to South America, I will definitely use this travel company again.

When renting a car, inspect the vehicle with the sales rep and document with photos any dents, dings, or damages prior to leaving the rental company to avoid any back and forth on its return.